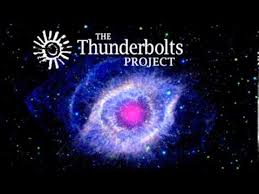 Here are the best in the field of the Electric Universe.  The Thunderbolts project is a group of multifaceted, talented men looking outside the box.

With this introduction, David Talbott begins a series of video presentations exploring the profound celestial events that shaped early cultures the world over. It’s a vast subject with radical implications—a new perspective on planetary history and the human past.

See the three full documentaries in the Symbols of an Alien Sky series:

Episode 1, Symbols of an Alien Sky

Episode 2, Symbols of an Alien Sky: The Lightning-Scarred Planet, Mars

Episode 3, Symbols of an Alien Sky: The Electric Comet

Here, we present the full version of the popular documentary film “Thunderbolts of the Gods,” which helped to introduce the world to the Electric Universe in 2006.

In this interview, Stephen Smith, editor of the Thunderbolts Picture of the Day (TPOD) reviews evidence for a former epoch of planetary instability and massive electrical scarring of planets and moons. http://www.thunderbolts.info

CORRECTION: At 10:39, an image of Jupiter’s Europa is inadvertently shown when discussing the moons of Saturn.

Stephen Smith continues his review of electrical scars on rocky bodies of the solar system, here concentrating on the planet Mars, perhaps the best laboratory in space for exploring the violent electrical history of our planetary neighbors and of earth itself. See also on YouTube: “Planet of a Thousand Mysteries” and “The Lightning-Scarred Planet Mars.”

Bring it down to Earth, this is an introduction, an open door. The next move is yours.