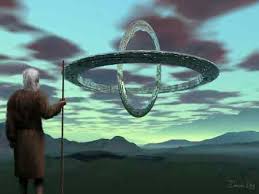 Contact changes its nature with the human mind, as the mind changes and adapts to what it can understand. Contact also changes the human mind – widens its scope and makes it possible to see more once you have seen.

There was a clip in the movie “What the Bleep” Do we Know!?” where Dr. Candace Pert (1946-2013) who has been called “The Mother of Psychoneuroimmunology”, and “The Goddess of Neuroscience” tells the story of ‘The shaman and Columbus’s clipper ships vision’

The story illustrates, IMO, how the human mind works to stabilize what we know as ‘our reality’. It takes a minute for us to recognize a thing, a fact, a concept in our reality enough to even know that it is there, in front of our faces. Whether we like it or not, we live in a type of hive mind that is a shared reality that says, ‘together we all see this, so it is part of our reality that we can be together in and therefore say is real.’, but if one person sees a something that another person does not, then it is not real. Unless you are one of the way-showers, a shaman whose job it is to teach and protect your tribe.

An idea, or a something – a physical something, once given context by someone else, helps the rest of us to understand and see it.

It is interesting that humanity has seen ‘air ships’ forever, and over time our ‘vision’ of them has changed. For instance, the Ancient Aliens TV show has documented just about every case and iconographic example from the ancient past.

Then in the mid 18oo’s people saw weird flying wooden ships that Walter Bosley wrote about in his book, “Breakaway Civilization, Nymza and the Senora Aero Club”

The term foo fighter was used by Allied aircraft pilots in World War II to describe various UFOs or mysterious aerial phenomena seen in the skies over both the European and Pacific theaters of operations.

Though “foo fighter” initially described a type of UFO reported and named by the U.S. 415th Night Fighter Squadron, the term was also commonly used to mean any UFO sighting from that period.[1] Formally reported from November 1944 onwards, witnesses often assumed that the foo fighters were secret weapons employed by the enemy. From <https://en.wikipedia.org/wiki/Foo_fighter>

We have all of the legends from Germany about Alien replication craft, Roswell, Holloman AFB, and in to our modern age, where you can follow a very definite, purposeful molding of public knowledge and information into what only can be considered a carefully thought out and executed plan to focus our hive-mind-attention in a certain direction.

So, enter the idea of context, because that is what has changed over time and from person to person. The culture describes what it is seeing in terms of its context, which changes what and how they describe what they have seen. We’ve gone from flying turtles and snakes to ‘real’ ET’s in craft, to plasma spyballs from other dimensions. From interior voices of the gods to channeled ultradimensional beings from another realm. From solid 3D reality being superior to flickering on and off every 10 to the 22nd power times per second – quantum consciousness interacting with energy.

All we can ever do is extrapolate on the data to try to keep up with how fast reality is changing today, and realize there are Master Manipulators out there taking us on the wildest ride of our lives right now – some for their own damned good and others who are those shamans and way-showers who are desperately trying to expand our paradigms to keep us alive.

It’s that Damned Cosmic Box again, and I really want to shred the irritating confines of its idea paradigms right now.  I think the message of the dream yesterday in part was about how very easy it would be to change your entire perspective on reality if you could understand the viewpoint and change it, ever so slightly.

How do you let yourself see something you’ve never seen before?