It’s like being a parent. Sort of. The body has its own innate wisdom and intelligence. It was made to carry a soul, but the poor soul is ignored by most adults. If fact, adulting is measured by how successfully you can ignore your soul. Do this. Do that. Now. In order. It doesn’t matter if you want to be outside communing with nature. It doesn’t matter that you have an idea to do something exciting, something else. You MUST get up and make the day work.

We are never taught to listen to our souls – well except if you choose the religious life, even then, you are taught that this happens ONLY one way, their way – and still that special communing with your soul might happen but rarely does, all because you are not taught to listen, you are taught a method – and the method is a purposeful distraction that keeps you out of yourself at all times.

And yet, there is a totally innate inborn system to do this that has been there as long as there have been humans. The two, body and soul, work in tandem naturally. Its why we get ulcers when we carry anger…etc. and, upon thinking about it, imo, it just might be a tri-fold system where the unity of body and soul open a doorway to a larger aspect of yourself and the universe. However, today, it’s mostly talked about as a binary system. Body-container and what rides in it.

This third part, once invited in becomes your observer, or higher self. The one you talk to in running conversation all day in your head. It is also the one that notices when you get a severe case of the stupids and tells you “You might want to rethink that.”

In fact, to get that part of yourselves attention, you need to notice it, because whatever you turn your attention to, notices you back. I have noticed. (lol) I have noticed down to even inanimate objects. As a matter of fact my mom taught me that. Her ‘stuff’, her car, the vacuum cleaner, the washing machine all had personalities. She would talk to them all the time and to my child’s eyes it seemed they heard her. Because it was something my mom did, I did it too and to my surprise, my ‘stuff’ has its own personalities too. Her cars always had a name. so do mine. They have personalities of their own – an essence that is noticeable. Her dogs always seemed more human to me, and that is because of the quality of attention she gave them – or anything. She was one of the most attentive people I have ever known.

Which led to me learn that all ‘stuff’ – be it animate or inanimate has a signature. Some of those signatures are more aware than others, being they were a higher order of matter – living things, trees animals etc. But what we consider inanimate ‘stuff’ has a signature too and the more attention you give it, the more developed that signature becomes. I kid you not. If you use your attention. If you do not, they never ‘wake up’.

And so on in every case.

Which, of course led me to Morphic Fields to explaining the above. Once you run out of matter, you run into energy and energy is a field. And fields are patterns and or frequency as in it repeats. Patterns are nothing more than repetitions of frequencies. How they comingle and how they interact are Morphogenic fields. Morphogenic fields are fields that change over time with more information added to them. They grow or evolve. That makes them interactive, so the more you notice them the more information exchange goes on. They are fractal in nature meaning that just like a magnet, if you cut it in half you do not end up with one piece a north end and one piece a south end, you end up with two magnets.

Morphic fields are not static – meaning they move and interact with every other field out there within a sea of fields. They have resonance and a sort of collective memory and they act in non-local ways. In larger more complex morphic fields like that of the collective unconscious of everything on this earth that is us – including every last rock and grain of sand – there is a huge vast very old intelligence that we are a part of like a cell within our own bodies. There is LOTS of information there.

So, if you query a morphic field, will it teach you?

Imo: yes, if you can listen, if you will listen.  It will teach you by resonance. Sometimes listening is telepathy. I have heard lately that telepathy is a learned language, that it takes thought and feeling. I, of course think it takes a third aspect, that of intent. Without intent we just lob thoughts out there into the morphogenic sea. 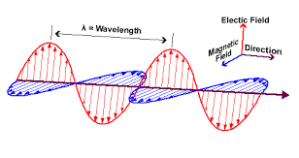 If you look at an electromagnetic field, it has two energies: a magnetic one and an electric one travelling at right angles to each other, and that would be confusing as to vector if it didn’t have guide wire.

Well, telepathy, it occurred to me, is just like that. You have thought and perpendicular to that thought is an accompanying e-motion – so we are almost always producing telepathy, it’s just that like that guide wire in the above, we rarely hook it up with intention to give it a direction.

Usually we are producing these thoughts with emotion and just plopping them into the general morphic field around us with no vector. Which serves the purpose of attracting more of what you just put out. However, when we cohere the thought with emotion and direction using intent, then, it goes somewhere and does the work with whatever emotional energy you have imbued it with.

This makes intent/attention the address. On the other side of the equation though, there is the receiver. If the receiver isn’t paying attention, then maybe the packet gets stored in the subconscious mind of the receiver instead of being noticed by their conscious mind? Or it pops up for you to notice if you can decode the message later. Funny story here:

Once I was at a health expo in Chicago where a group of Tibetan monks were building a huge beautiful sand mandala in a big airy atrium and I was just watching them for a minute before exiting the place to go home. It occurred to me while watching that in reality, these mandalas when finished carried an energy signature that extended beyond the flat 2D realm, that they had 3D-4D energy to them. I could just catch what it looked like in my mind’ eye. The idea really excited me! Wow!! So, to see if I was right, I tried to ask one of the gentlemen not dressed like a monk, but who was obviously with them and looked like the spokesperson. There were many monks there besides the ones working on the mandala. A couple were leaning on the posts sitting on the floor obviously taking a break, some were visiting with the people watching. As I tried to ask the question to this man several times, who couldn’t understand me, a voice in my head said “Of course it is three dimensional!” To wit, I said back mentally “Shush, I am trying to ask a question here!” The man just refused understand me and I looked away and noticed one of the monks who was resting against a post was silently laughing. At the time I thought he was laughing at me for trying to ask a stupid question and being thoroughly frustrated because no one would answer me. It wasn’t until I was in my car driving home that I realized what actually happened. That reclining monk had answered me, telepathically and thought it was funny when I told him to be quiet.

This Tibetan monk very obviously had training. What he said came through clear as a bell. And I, LIKE AN IDIOT, shushed him because my left brain was so busy pursuing an answer. No wonder the dear soul was laughing. Once I realized it I laughed too – all the way home.

It’s funny how we all pursue something thinking out question bombs, throwing that energy out all around us and then not notice the answers when they come to us, because they didn’t come in the way we expected them to come. But I guess that’s part of the “figure it out as you go” life on this planet. I mean, god forbid we ever get training in this sort of stuff.