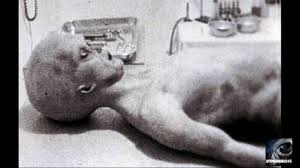 The other day, on 4 June 2019, a document surfaced on imgur.com which purports to be a memo from former NIDS staffer Dr Eric Davis, addressed to Bob Bigelow, dated 23 March 2001. I will scatter the eleven page memo throughout this post, so readers will have the original source document to review.

The memo is titled “Kit Green’s professional evaluation of the ‘Alien autopsy (from the Roswell Incident) Film/Video’ and other related information.”

Curious-er and curious-er Kit Green keeps showing up in many things and in many ways. Dr. Christopher “Kit” Green, M. D., Ph.D., FAAFS served in the CIA from 1969 to 1985 on what was called the Weird Desk. Grant Cameron has had a lot to say about him over the years.

Christopher (Kit) Green, M.D., Ph.D. is an Assistant Dean (Asia Pacific) of the Wayne State School of Medicine in Detroit, Michigan. He holds clinical appointments as Professor in the Departments of Diagnostic Radiology and Psychiatry & Behavioral Neurosciences of the Harper University Hospital, Detroit Medical Center. He is also Professor at the Institute of Biophysics / Laboratory of Brain and Cognitive Science, of the Chinese Academy of Sciences. He maintains an active clinical private medical practice in forensic medicine and neuroimaging, neurogenomics, and neurotoxicology. Kit’s specialty includes the determination of morbidity and mortality of neurological and psychiatric disease due to unsuspected etiology. 20% of his medical practice is pro bono related to the forensic investigation and diagnosis of patients injured by anomalous events. From <https://www.irva.org/conferences/speakers/green.html>

Very curious also, is that his biography reads like that of Richard Charles Niemtzow, MD, PhD, radiologist with so many letters after his name they could fall off and get lost, who as it seems, worked for the navy and air force , Mufon and chased cases like Bentwaters and Cash Landrum. He was also studying the medical effect of ‘anomalous’ events on experiencers more specifically high frequency radiation like microwaves. (is there a connection here to 5G?) He found that the larger nerve bundles of the musculoskeletal system could be paralyzed by exposure to certain microwave frequencies… (it is all about frequency, isn’t it?) It brings to mind the subject of sleep paralysis and abductions. This can also be referenced back to VOG tech etc. because the only difference is that of…frequency in the electromagnetic spectrum.

I bring this up because after seeing his name was mentioned in the alien autopsy papers, I followed the link to an article on him. He had people from all over the place trying to recruit him to work on the ‘radiation’ angle (frequency studies on the human organism), much like the type of radiation that effected John Burroughs causing him to need heart surgery from damage that occurred from being in close proximity to a UFO due to the size of the wavelet of energy emitted from the UFO. Terra Hz radiation range is from 1 millimeter (less than 1/16th of an inch) to sub millimeter into atom size. I bring this up because Kit Green (1) was one of the people who helped John Burroughs get the medical help he needed after his military records were ‘classified’ due to his exposure to the terra Hz. radiation which was…classified too. The specific millimeter radiation that effected John’s heart did so by a process of resonance, another word for synchronized vibrations in the terra Hz range that were in mathematical ratio to the structure in his heart that was damaged. At 50 millivolts per centimeter is the measurement size that corresponds to e-field effects in the cognitive perceptual range of the brain, meaning memory and perception can be altered. This is an area of investigation that should also be pursued, especially with the upcoming 5G start up. There are many points to be concerned with, but that is another article. Patents for most of this information have been public information for more than 10 years, it’s just a matter of connecting the dots.

Dr. Eric Davis, who shows up in the Admiral Wilson papers, is the one asking for answers from Kit Green in the Alien Autopsy paper.

What has all of this got to do with the autopsy pages? Well nothing, and everything. The interconnectedness of all of these people in all of the places – like everywhere you turn you find Dr. Eric Davis, Kit Green, Hal Puthoff… etc. is to me very, very interesting.

This question can be found on pg.7 of the documents. Dr. Davis asks Dr. Green about whether he thought the autopsy and the pictures and the Santilli film were real.

ASKED AND ANSWERED. WHAT CAN BE MORE DIRECT THAN ‘THE VIDEO IS REAL?

Here is the Alien Autopsy video. It was hard to find as most copies have been cleaned from you tube.

CAUTION: this is graphic. If the notes in these emails are to be believed, that was once a living being that died burning to death. It is not pretty.

One of the most interesting and aggravating things to read was on:

THE RIGHT TO KNOW BY A BASICALLY NON-MERITOCRIOUS POPULATION IS DISPUTED BY MOST OF THE PLATO-LIKE MINIONS IN THE PROGRAMS THAT ARE REALLY BLACK. NOT JUST THIS PROGRAM.

THERE IS A BELIEF BY MOST PEOPLE IN THE HIGH EXECUTIVE BRANCH APPOINTED POSITIONS THAT THE AVERAGE PERSON ISN’T ABLE TO UNDERSTAND OR HANDLE THE COMPLEXITY…AND WOULD SCREW THINGS UP BEYOND BELIEF. THEY, AS LONG AS THEY ARE IN CONTROL…BELIEVE IN A SINGAPOREAN GOVERNMENT MODEL OF A LEE KWAN MERITOCRACY; GOVERNMENT BY THE MOST EDUCATED AND ELITE, AND BENEVOLENT DICTATORSHIP…THEY BELIEVE WHAT THEY READ IN PLATO, THOMAS PAINE, MACHIEVELLI…AND THEY DO NOT BELIEVE WHAT THEY READ IN ARISTOTLE, JEFFERSON, OR ROOSEVELT.

IT IS A LEGITIMATELY CLASSIFIED BLACK PROGRAM, CONTROLLED BY PERSONS WHO HAVE CLOUT AND POWER, ARE VERY SMART, AND AMONGST THE BRIGHTEST PERSONS ON THE PLANET. THE PROGRAM IS SANCTIONED AND LEGALLY PROTECTED BY THE CONSTITUTIONAL NATIONAL SECRURITY JUSTIFICATIONS THAT HAVE ALWAYS BEEN TESTED IN THE HIGHEST COURT OF THIS LAND TO TAKE PRESCEDENCE OVER THE 1ST AND 4TH AMENDMENTS. (2) THE FACT THAT WE MAY NOT UNDERSTAND, NOR AGREE WITH THE LITTLE WE KNOW, IS NEITHER EXPLANATION NOR JUSTIFICATION FOR OUR NOT HAVING WHAT THEY BELIEVE IS A “NEED TO KNOW” BASED ON OUR ‘WANT TO KNOW”.

Here’s the thing about the need vs. want: the ‘Want-to-know’ has evolved into a ‘Need-to-know’ if the planet is going to survive – so say I and LMH, Richard Dolan, Dr. Greer and every contactee ever. It is the first thing they are taught – and basically, we all agree – the whole planet, now in 2019, as we have been educated on all sides since the early 1960’s by organizations like Green Peace and even those pesky long-haired hippies. This is tied to – married to the ET-UFO question by virtue of the information about our biosphere and by the energy problem as Dr. Greer explains it:

In the 1950s, there was no great concern over global warming, eco-system collapse, ozone depletion, rain forest loss, bio-diversity degradation etc. In the wake of WW II, what was needed was stability, not a new convulsion of the world economic, technological and geo- political order. Remember: those in control like to stay in control. They are risk – averse, do not like significant change and do not give up control and power easily.

The disclosure of the existence of ETs, with the inevitable disclosure related to these new technologies soon to follow, would change the world forever – and they knew it. This was to be avoided at all costs. Besides, that was the era of ” what is good for GM is good for America” , and the same would be true of big oil, big coal and the like.

The inescapable fact is this: The disclosure of the ET presence would bring with it the certain release of these technologies -and that release would sweep away the entire technological infrastructure of the planet. The changes would be immense – and sudden. From <https://siriusdisclosure.com/cseti-papers/understanding-ufo-secrecy/>

We are way beyond want. We. Are. In. Need. So is the planet. I am holding my breath that we have not passed beyond the ‘fixing it’ tipping point. We are WAY past a few elite running this world into the ground, so to speak, for their own desire fulfillment! If we do not pull our heads out of our respective metaphoric asses, we are goners. How do the elite expect to live here? IMO. They don’t. they are going to leave, wait till the destruction is complete and come back to start ‘fresh’.

I understand Dr. Green’s anger and frustration couched in philosophy, but obvious all the same.

This is an interesting document and leads to many other interesting connections. Start diggin’ folks. The time is short.

Ps. Oh yeah…lol as an aside, once again, it’s pointing to:

this could ALL be true.

Congress shall make no law respecting an establishment of religion, or prohibiting the free exercise thereof; or abridging the freedom of speech, or of the press; or the right of the people peaceably to assemble, and to petition the Government for a redress of grievances. From <https://www.constituteproject.org/constitution/United_States_of_America_1992>

The right of the people to be secure in their persons, houses, papers, and effects, against unreasonable searches and seizures, shall not be violated, and no Warrants shall issue, but upon probable cause, supported by Oath or affirmation, and particularly describing the place to be searched, and the persons or things to be seized. From <https://www.constituteproject.org/constitution/United_States_of_America_1992>