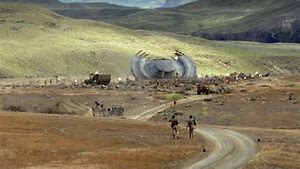 About the alien autopsy (s), plural, because you find out from LMH’s Wednesday broadcast that she spoke with Ray Santilli, and Santilli directly interviewed “JB” who filmed not only the craft, but the Autopsy (s). Of the four bodies, one was alive, and one was the least damaged of the four and it was autopsied first. The ET that was live lived for two years, and upon it’s death, was autopsied in a large theater, with many watching and purportedly, Truman sat in on it.

In this broadcast Linda relays the interview Santilli was finally able to get from JB who wished to be anonymous. This makes my heart sick.

They waited until first light to even see to the bodies, which were alive, and crying out and in pain. When they did gather them up they had medical personnel look at them because they were so badly wounded. They then proceeded to tape and tie down these wounded people to transport them all the way from Sirocco, Mexico to Right Field in Dayton Ohio. This was in 1947, air travel then was slow. Imagine the agony those people felt – the actual physical pain, because you knew they were feeling it due to the crying that they could all hear even before they went into physical proximity to the craft. I personally wouldn’t let my dog suffer like that – much less tie and (!) tape him down for a 3 hour period while I got him to the doctor! And with the treatment they got, it isn’t hard to imagine that even then they were not given any empathic care or simple kindness.

Further one of the beings lived for two years after the event. Well, this is the one who was autopsied in 1949 in the large theater in front of many people and is where the extra information about what they found in the interior thoracic cavity and brain were garnered.

I am led to wonder if Sgt. Stone wasn’t one of the military personnel there because if you listen to any of his interviews about crash retrieval, he is always upset. I think I would be too if I had to wittness this inhumanity to any being at the hands of another human. LMH says she thinks and has heard that they were clones. Even if they were IT WAS OBVIOUS THEY WERE IN PAIN AND DISTRESS and nothing was done. Since when does a human being sit and watch another living being in agony and DO NOTHING ABOUT IT !?!? I also think that this is where we get the story of the alien being that was held somewhere that people have talked to and were scared of. ‘JB’ was scared enough to have needed to call them ‘freaks’ so he didn’t have to look at the fact that they were real, like he was, and maybe he was just as sickened by their treatment and needed to call them freaks so it didn’t seem so bad.

We are xenophobic, color phobic, disability phobic, body appearance phobic – for that matter we are phobic-phobic. The only thing this works for is war. War is a good excuse to go and wipeout anything you are phobic about… nobody seems to notice our phobias are weaponized and monetized… jus-say’in…

It’s a horrible thing to admit, to watch, and a terrible pill to swallow to think that this went on, not several times, but many and that we are so brutal. We are beasts. I am ashamed to be grouped in the ranks of those who would do something like this. Dr. Greer call them sociopaths. I think they are psychopaths – totally disconnected from humanity and any kind of human kindness. I think that may be why it is so easy to call the Santilli information and film a fake, because then we don’t have to admit that it happened.

So far the military have been the main mode of contact with other beings for 100 years. I would have quarantined this planet for another 100 years had I been in the visitors’ shoes. And yet they haven’t. There are CE5 programs out there Like Kosta Makreas’s and Steven Greer’s that have been going on for quite some time.

In the meantime, think about our role as beasts – think about if you would choose that role, think about the Alien-As-Bad Guy meme. I’m tired of it all. I’d like to think I might have grown beyond it. How about you?