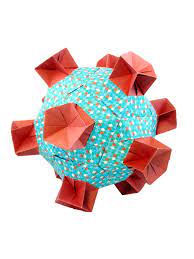 So earlier today I was viewing Kerry Cassidy’s latest interview with Dr. Robert Young. The question was asked, what does the nano in the vaccines do? And just by chance I ran into this information and pulled a few article abstracts – looks like it can to be programmed to do anything they want it to.

I have learned a new and tantalizing term: DNA Origami. It is a technique of using DNA as building blocks for the creation of of nanoparticles to grown in various environments, in various sizes and depending on the coating applied and its electric charge allowing various functions. It is one of the newest methods in the field of nanotechnology. It could have groundbreaking implications in the targeted treatment of cancer.

The articles I found:

We present a strategy to design and construct self-assembling DNA nanostructures that define intricate curved surfaces in three-dimensional (3D) space using the DNA origami folding technique. Double-helical DNA is bent to follow the rounded contours of the target object, and potential strand crossovers are subsequently identified. Concentric rings of DNA are used to generate in-plane curvature, constrained to 2D by rationally designed geometries and crossover networks. Out-of-plane curvature is introduced by adjusting the particular position and pattern of crossovers between adjacent DNA double helices, whose conformation often deviates from the natural, B-form twist density. A series of DNA nanostructures with high curvature—such as 2D arrangements of concentric rings and 3D spherical shells, ellipsoidal shells, and a nanoflask—were assembled.

DNA origami structures can be programmed into arbitrary shapes with nanometer scale precision, which opens up numerous attractive opportunities to engineer novel functional materials. One intriguing possibility is to use DNA origamis for fully tunable, targeted, and triggered drug delivery. In this work, we demonstrate the coating of DNA origami nanostructures with virus capsid proteins for enhancing cellular delivery. Our approach utilizes purified cowpea chlorotic mottle virus capsid proteins that can bind and self-assemble on the origami surface through electrostatic interactions and further pack the origami nanostructures inside the viral capsid. Confocal microscopy imaging and transfection studies with a human HEK293 cell line indicate that protein coating improves cellular attachment and delivery of origamis into the cells by 13-fold compared to bare DNA origamis. The presented method could readily find applications not only in sophisticated drug delivery applications but also in organizing intracellular reactions by origami-based templates.

So, for your edification. There are a lot of articles on google scholar. Research in this field has a decade or more of work behind it.