This video is wonderful and I recommend it. It’s an interview about her new book, which I am purchasing. She says it all.

And yes, we are right there. 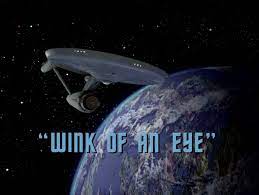 Remember the Star Trek Episode where the Enterprise is hijacked by hyperaccelerated, (normally invisible time-accelerated) sterile aliens who want the crew for breeding stock?

“Wink of an Eye” is the eleventh episode of the third season of the American science fiction television series Star Trek. Written by Arthur Heinemann, based on a story by Gene L. Coon (under the pen name Lee Cronin), and directed by Jud Taylor, it was first broadcast on November 29, 1968. https://en.wikipedia.org/wiki/Wink_of_an_Eye

Now think about the paranormal/interdimensional/alien question where they operate in ‘dimensions’ that are in a higher ‘frequency’ than we are – or the astral realm – that of course, we can’t see or perceive, and why we must raise our frequency to enter into a new world…yada, yada.

Yes, this is a real science. Its about the Critical Flicker Fusion Frequency (there is that frequency word again), or the FPS of our brains. Frames per Second – FPS – is the rate we process information in the brain and shapes our perception of the world. (FYI video runs at 24/second)

Our temporal resolution is 60 hertz per second. This is measured by using an electro-retina-gram (strobing tachometer) measuring electrical impulses in the brain by flashing a strobe light into the eye and noting the threshold where the strobe turns into continuous light instead of flashes.

The CFFF of dogs is 30; so they perceive things 33% faster than humans – or THEY PERCIEVE TIME 33% SLOWER than we do. So when they listen to us we talk in slo-mo… Dogs couldn’t even really see videos on our phones till they increased the fps from 60 to 90 Hz. Which makes me wonder if that is why we are all catching so many good videos of UFOs nowadays, hmm????

Ever wonder why flies are so dagnabbed hard to kill? Well their time goes by much faster than ours at a rate of 270 Hz… making the movement of your hand as slow as watching grass grow, they ‘see’ you coming for a long time. So if you ever want to catch one, move really slowly…

Watch this video for more examples of temporal resolutions. I guarantee it’s really fascinating. How The World SOUNDS To Animals

How The World SOUNDS To Animals

Now, to the reason I bring this all up. So Star Trek was once again truth telling. Temporal resolution ‘speed’, our time perception speed, as it were, is key to why things can seem like they can just keep popping in and out of our ‘dimension’ at will, think time resolution. If we had a device that we could use to speed up or slowdown our time resolution perception, just think of the fun we could have…

One more speculative thing here, remember the tower of babel? Remember how our entire ‘time’ structure on the planet is governed by 60 seconds in a minute and sixty minutes to the hour that the Babylonians gave us? Maybe all they had to do was alter our ability to perceive time or at least convince us of it by giving us the number 60 in so many ways…

Could it really be that simple?

Then will the astral intrude into the lives of men – then will the old gods walk the world amongst the people once again and chaos reign.

When the invisible becomes visible, the thoughts of people will be seen by all – all will be known and judged by all people alike.

Then will true light fill the planet and the planet shine for all the stars to see.

On this day all souls will shine bright with terrible light, their perfection to reveal.