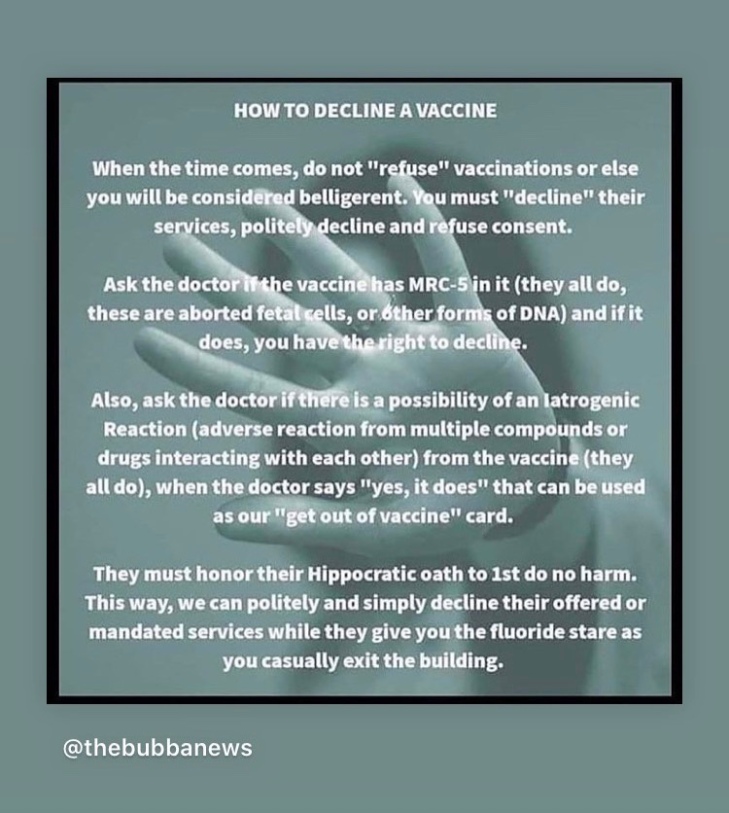 How do you say no to a professional without head-butting them? By having some information at your disposal. Not sure whether they will mandate the cV19 vacc or not, but-fore warned is fore-armed.

Abstract: MRC-5 is the most common human diploid cell (when you see diploid, think fetal*) line used in production of viral vaccines; mesenchymal stem cells (MSCs) is a type of adult multipotent stem cells. Both cell types share the same fibroblast-like morphology and maintain a normal diploid karyotype over long in vitro expansion. (meaning they can be replicated many times in manufacturing without mutating…too much*) *Author addition. https://www.sciencedirect.com/science/article/pii/S0264410X14010238

This will rattle your cage a bit – but it is very interesting.

The paragraph below is from the article she mentions and the web site is really all that. I was amazed.

These results unquestionably confirm the presence of fetal DNA in Priorix tetra vaccines, in variable quantities from batch to batch, indicating poor quality control of these pharmaceutical products.

We’d also like to remind the report on the entire MRC-5 genome sequencing published in Corvelva website on September 27 20194 showing the deep modification of this DNA even in genes linked to the development of tumor diseases (this data also will soon be published). The contaminating fetal DNA found in all the analyzed samples in variable (ie uncontrolled) quantities is up to 300 times higher than the limit imposed by the EMA for carcinogenic DNA (10 ng / dose, corresponding to the DNA contained in about 1000 cancer cells, on the basis of a statistical calculation, while the precautionary limit is 100 pg / dose), a limit that must necessarily be applied also to fetal DNA inevitably contaminating Priorix Tetra vaccine. https://www.corvelva.it/en/speciale-corvelva/vaccinegate-en/first-peer-reviewed-publication-on-mmrv-vaccines-priorix-tetra.html

But for what is needed to create the yearly flu vaccines, or an influenza type vaccine, you need a different type of cell, one originating from a dog…

Which came first the spaniel or the egg? Novartis’ flu vaccine plant OKed

A long dead cocker spaniel will play a key role in helping people avoid the flu this winter after a landmark approval from the US FDA for Novartis’ cell culture based vaccine plant. HTTPS://WWW.BIOPHARMA-REPORTER.COM/ARTICLE/2014/06/18/WHICH-CAME-FIRST-THE-SPANIEL-OR-THE-EGG-NOVARTIS-VACCINE-PLANT-OKED

Swiss vaccine manufacturer, Novartis, uses the Madin-Darby Canine Kidney (MDCK) cells derived from a female cocker spaniel in 1958 to provide for a quicker, simpler and more reliable production of the influenza type virus.

Traditional influenza manufacturing relies on a large number of fertilized chicken eggs to grow the virus strains and requires many months of organization of egg supplies , virus incubation and actual preparation of the vaccine before it ever hits the markets.

Animals have been used in the industrialized production of human vaccines since vaccine farms were established to harvest cowpox virus from calves in the late 1800s. From that point, and through the first half of the 20th century, most vaccines would continue to be developed with the use of animals, either by growing pathogens in live animals or by using animal cells.

Although many vaccines and anti-toxin products were successfully developed this way, using animals in vaccine development – particularly live animals – is not ideal. Research animals are costly and require extensive monitoring, both to maintain their health and to ensure the continued viability of the research. They may be carrying other bacteria or viruses that could contaminate the eventual vaccine, as with polio vaccines from the mid 20th century that were made with monkey cells and eventually found to contain a monkey virus called SV40, or Simian Virus 40. (Fortunately, the virus was not found to be harmful to humans.) Moreover, some pathogens, such as the chickenpox virus, simply do not grow well in animal cells.

Even when vaccine development is done using animal products and not live animals – such as growing influenza vaccine viruses in chicken eggs – development can be hindered or even halted if the availability of the animal products drops. If an illness were to strike the egg-producing chickens, for example, they might produce too few eggs to be used in the development of seasonal flu vaccine, leading to a serious vaccine shortage. (It’s a common misconception that influenza vaccines could be produced more quickly if grown in cell cultures compared to using embryonated chicken eggs. In fact, growing the vaccine viruses in cell cultures would take about the same amount of time. However, cell cultures do not have the same potential availability issues as chicken eggs.)

For these and other reasons, using cell culture techniques (like the MDCK) to produce vaccine viruses in human cell strains is a significant advance in vaccine development.

Two main human cell strains have been used to develop currently available vaccines, in each case with the original fetal cells in question obtained in the 1960s. The WI-38 cell strain was developed in 1962 in the United States, and the MRC-5 cell strain (also started with fetal lung cells) was developed, using Hayflick’s technology, in 1970 at the Medical Research Center in the United Kingdom. It should be noted that Hayflick’s methods involved establishing a huge bank of WI-38 and MRC-5 cells that, while not capable of infinitely replicating like immortal cell lines, will serve vaccine production needs for several decades in the future.

What is an Iatrogenic Reaction?

When the test and or the treatment is worse than the problem.

Iatrogenic disease is the result of diagnostic and therapeutic procedures (like a CV19 test or vaccine *) undertaken on a patient. … An iatrogenic disorder occurs when the deleterious effects of the therapeutic or diagnostic regimen causes pathology independent of the condition for which the regimen is advised.Jul 21, 2011 Iatrogenic Disorders – NCBI *Author addition

Look at the links included, they are interesting in light of the speculation flying around in the current hurricane of created confusion.